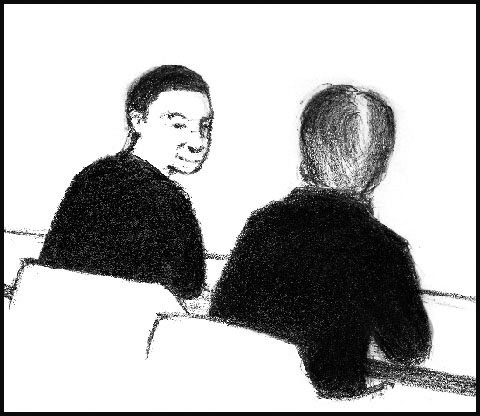 Yusuf Bey IV speaks with his attorney Gene Peretti.
Following the completion of the prosecution’s evidence in the Chauncey Bailey murder trial, on May 4 defense attorneys for defendants Yusuf Bey IV and Antoine Mackey, Gene Peretti and Gary Sirbu, respectively, called witnesses intended to cast doubt on the testimony and evidence presented by the prosecution. Both attorneys waived opening statements, and Peretti called only one witness: Cornell Hurst, who contradicted Devaughndre Broussard’s alibi for the murder of Michael Wills.

Broussard had previously testified that he had been at the counter of Your Black Muslim Bakery, which was open for business, ready to receive customers, when he heard shots fired the night Wills was killed nearby. Wills was murdered at around 3AM the morning of July 12, 2007. While cross-examining Broussard, Peretti asked whether the bakery was ever open for business at 3AM.

“It would stay open as long as Yusuf Bey said it would,” Broussard said.

Hurst, who also goes by the name Khidar Bey, was an employee at the bakery since 2003, and joined while Yusuf Bey I was still alive. He performed management duties at the bakery, kept track of inventory, handled money, and helped with counter and baking duties. He testified when called by Peretti that the bakery counter would never be open at 3AM, and that employees would only be in the bakery at that time if they were baking late or mopping up.

This bolsters Peretti’s accusation that Broussard killed Wills himself. Broussard testified that Wills was killed by Mackey while driving around with Bey IV talking about “zebra killers,” black Muslims who killed white people to give them “a taste of their own medicine.” Of the three murders that Bey IV and Mackey are accused of, Wills is the only shooting that Broussard hasn’t confessed to committing himself. Broussard said that he killed Bailey and another man, Odell Roberson, under orders from Bey IV and assisted by Mackey.

Peretti told KGO-TV reporters that he thought the evidence against Bey IV was insufficient for a conviction, so his defense required little evidence. He said prosecutors “forgot to prove beyond a reasonable doubt that my client ordered three homicides and they haven’t proved it after all these witnesses.”

Sirbu had more evidence to present than Peretti, but was dealt a blow to his case early in the day when Judge Thomas Reardon ruled that another bakery associate, Richard Lewis, would not be allowed to testify because he intended to use his Fifth Amendment right to not incriminate himself during portions of the testimony. Reardon did not want the jury to speculate as to why Lewis would refuse to testify, and instead decided that Lewis’s testimony would not be accepted as evidence.

Sirbu has suggested that it was not Mackey that assisted Broussard in the killings of Roberson and Bailey, but Lewis, who was a close friend of Broussard’s. During his testimony, Broussard often referred to Lewis as a “cousin”. Sirbu’s first witness was instead Kevin Adams, Lewis’s high school football coach, who identified photos of Lewis from his high school yearbook, and described Lewis as a good running back.

Sirbu’s second witness was Lakeya Robinson, a friend of Jasmin Siaw, a former girlfriend of Bey IV. Robinson testified that Siaw had told her that she was involved in killing Roberson, that she had lured him to an area where he was shot by Tamon Halfin under orders from Bey IV. Not only did this contradict Broussard’s testimony that he and Mackey had killed Roberson, but bolstered Mackey’s defense at the expense of Bey IV’s. Robinson had approached Oakland police, at first anonymously, and claimed to be a coworker of Siaw’s at Sears, which was not true. She said she had obfuscated her identity because she did not want to testify in court, she had only wanted Siaw to be questioned by police for her role in the Roberson murder.

Under cross-examination, Prosecutor Melissa Krum pointed out that Siaw had dated Robinson’s brother for nearly two years, which Robinson claimed she had no knowledge of. Later, Krum called Siaw as a rebuttal witness, who testified that she had met Robinson through her brother, and that Robinson had alerted Siaw that her brother may be cheating on her, suggesting that they commit vandalism on his car for revenge. She also said that Robinson had dated Halfin, who she also implicated in the murder, and the two had visited Halfin in jail together. Robinson had previously testified that she had never met Halfin.

Sirbu also called Oakland police officer Jurell Snyder, who related a tense confrontation between police and members of Your Black Muslim Bakery on July 17, 2007, where Richard Lewis was in charge of six to twelve other men. Snyder said the incident ended without violence, but that the bakery members had been aggressive and confrontational, shouting at them and standing in military style formation.

Sirbu had a stipulation read to the jury that Broussard had given an interview with KTVU reporters on August 9, 2007, only a week after Bailey was murdered. In the interview, Broussard said he was innocent of Bailey’s murder and had been beaten by police until he signed a confession.

“I figured it would help me,” Broussard said.

Peretti cross-examined Broussard on this evidence, pointing out that Broussard had lied to get an advantage in his case.

“So it’s OK to lie if you can get some advantage?” Peretti asked.

Due to scheduling problems, and to allow an opportunity for a defense witness who did not show up to be arrested on a bench warrant issued by Reardon, further testimony has been delayed until May 17. The remaining defense evidence is expected to take less than a day, at which point closing arguments will begin, and the jury could be in deliberations by the end of that week. Devaughndre Broussard was recalled to the witness stand
by Prosecutor Melissa Krum to explain why he lied to the press.

This website is entirely supported by donation. You can support these ongoing reporting projects via PayPal or Patreon.